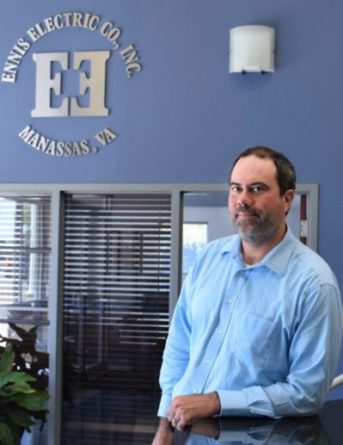 Chad Fisher is Vice President of Project Management at Ennis Electric, where he leads project management activities associated with major projects. He holds a bachelor’s degree in electrical engineering from the University of Maryland. Before joining the Ennis Electric team, Chad served in various electrical engineering management positions, including Director of Electrical Engineering, Senior Electrical Engineer and Operations Manager.

When asked about his favorite Ennis Electric memory, Chad responded, “What is most impressive to me is not a memory but rather an observation of the longevity of the employees at the company. When you routinely come across people who have worked here 25,30,35 years, it’s astounding and speaks volumes for how the company treats its employees. As someone who bounced between a few jobs before landing at Ennis Electric, it’s safe to say that it’s impossible to create a better work environment than the one that exists here.”

Outside of work, Chad keeps busy with his children. He enjoys playing hockey, coaching youth teams and cheering on his alma matter, the University of Maryland.